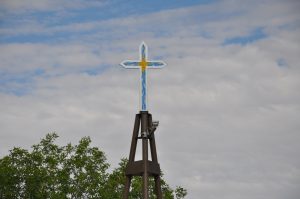 Showing God’s Love to the World

Going Beyond Our Walls to Build God’s Kingdom

Peralta Memorial United Methodist Church believes in showing God’s Kingdom to the world. Through action, prayer,   worship, and study we share the love of Jesus Christ.

We believe that we are called to do the things Jesus tells us to:

Please explore our website and find out ways that you can help make the Kingdom of God real,  here in Valencia County, New Mexico.

TO MAKE A DONATION, CLICK BELOW  DONATIONS MAY BE MADE TO THE CHURCH AND ALSO TO THE FOOD PANTRY MINISTRY WHICH HELPS TO FEED THOSE IN THE LOS LUNAS COMMUNITY.

In-person worship services are held at        8:30 am and 11:00 am every Sunday morning.  Per guidelines from NM governor, worship attendance capacity is now at a max of 75 people at each service.  Masks and social distancing requirements remain in place.

Cleaning will take place between services.

If you are ill, vulnerable or don’t yet feel comfortable attending worship in a group setting, please take advantage of the live streaming and/or recorded versions of the 8:30 am worship service.

Live streaming will still take place at 8:30 am Sunday mornings: go to www.youtube.com, and enter Peralta Memorial UMC in the search bar.  If live streaming is not available, please check the PMUMC Facebook page.

Or, you may find the channel by going to the
direct link: https://www.youtube.com/channel/UCSc430_wNcUi_tGp1u1D-qA.

CHURCH IS A NOUN

WE BELIEVE IT’S A VERB

Jesus said that his followers would be marked, and known, by their love. and that’s why we believe that church is love enacted. BUT, THIS ISN’T A NEW IDEA. THE EARLIEST FOLLOWERS OF JESUS WERE NOT DEFINED BY WHAT HAPPENED IN THEIR SPACE, BUT BY HOW THEY LIVED AND ACTED IN THE PUBLIC SQUARE. In the second century, when a plague swept the Roman Empire, Christians didn’t join those who were fleeing for safety to the countryside. Instead, they stayed in the cities to tend to the dying. They seized the opportunity to embody Christ’s love. And when their neighbors practiced infanticide, exposing unwanted children to the elements—where they’d either die or be snatched up to be trafficked or enslaved—Christians adopted vulnerable children into their families.

METHODIST FOUNDER JOHN WESLEY CALLED THIS ACTIVE ENGAGEMENT OF HUMANITY “SOCIAL HOLINESS.” By inviting others into their lives, including those who were isolated or marginalized, disciples of Jesus, Wesley maintained, would grow in their own commitment to Christ.

The United Methodist Church does want to share our hope in Jesus with more people, but we don’t expect strangers to knock on our doors and beg to sit in our pews. Instead, we believe the church grows itself by giving of itself, offering hope to a weary world.

Then those who’ve experienced the forgiveness and mercy of God gather as a community of hope—committed to worship together, practice spiritual disciplines and study Scripture. These are all ways we respond to the grace of God we’ve experienced, not how we earn it.

When “church” is a verb, when it’s love enacted, we live out what we’ve learned from following Jesus wherever we live, work and play.

The marks RETHINK CHURCH® and UNITED METHODIST COMMUNICATIONS® are the registered trademarks of United Methodist Communications. All rights reserved.